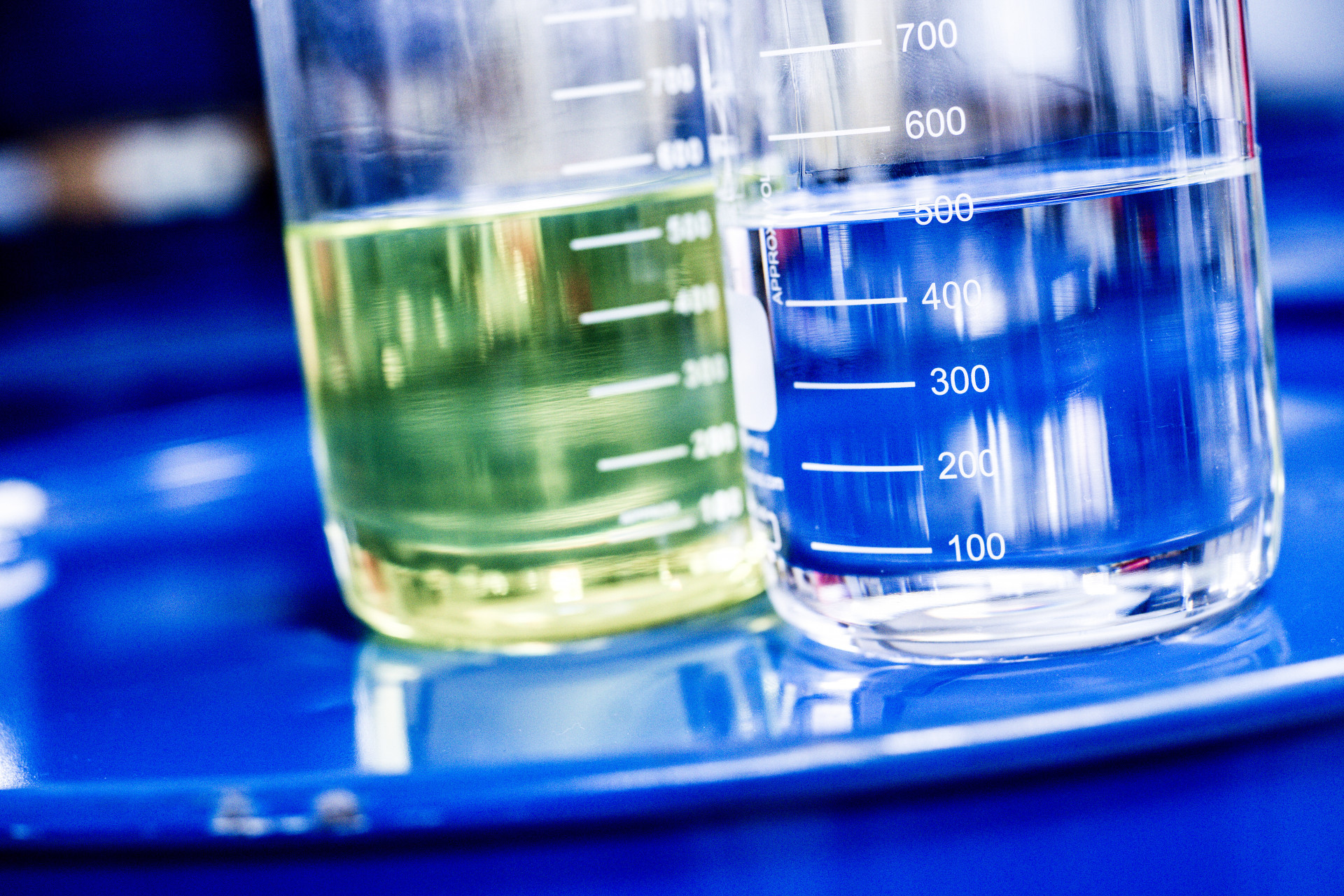 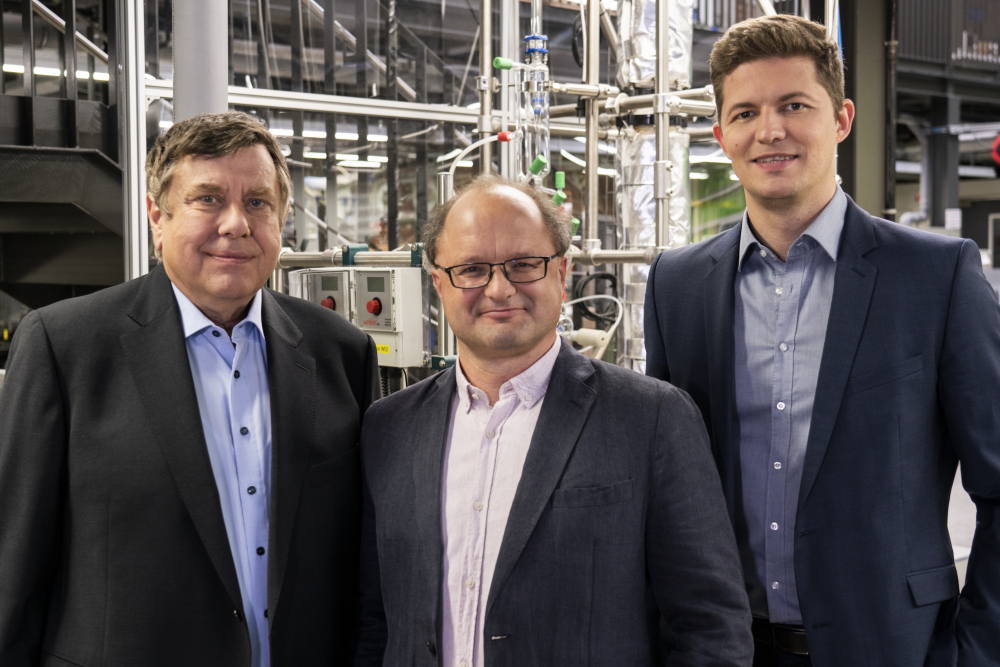 Energy from renewable sources presents an opportunity to secure a climate-friendly supply of electricity, heat and alternative fuels. Yet energy from wind or sunlight is not always available when needed. An energy storage medium like hydrogen is a solution, yet its use still poses a challenge. How can it be overcome? Prof. Dr. rer. nat. Peter Wasserscheid, Prof. i. R. Dr.-Ing. Wolfgang Arlt and Dr.-Ing. Daniel Teichmann have discovered a simple and convincing solution. With their discovery, the three nominated scientists have opened the door to a sustainable energy economy based on hydrogen. They came up with a new concept to bind hydrogen safely and inexpensively to an easy-to-handle liquid - and to recover it when needed. The carrier liquid serves as a "returnable bottle" for hydrogen and the energy stored in it. 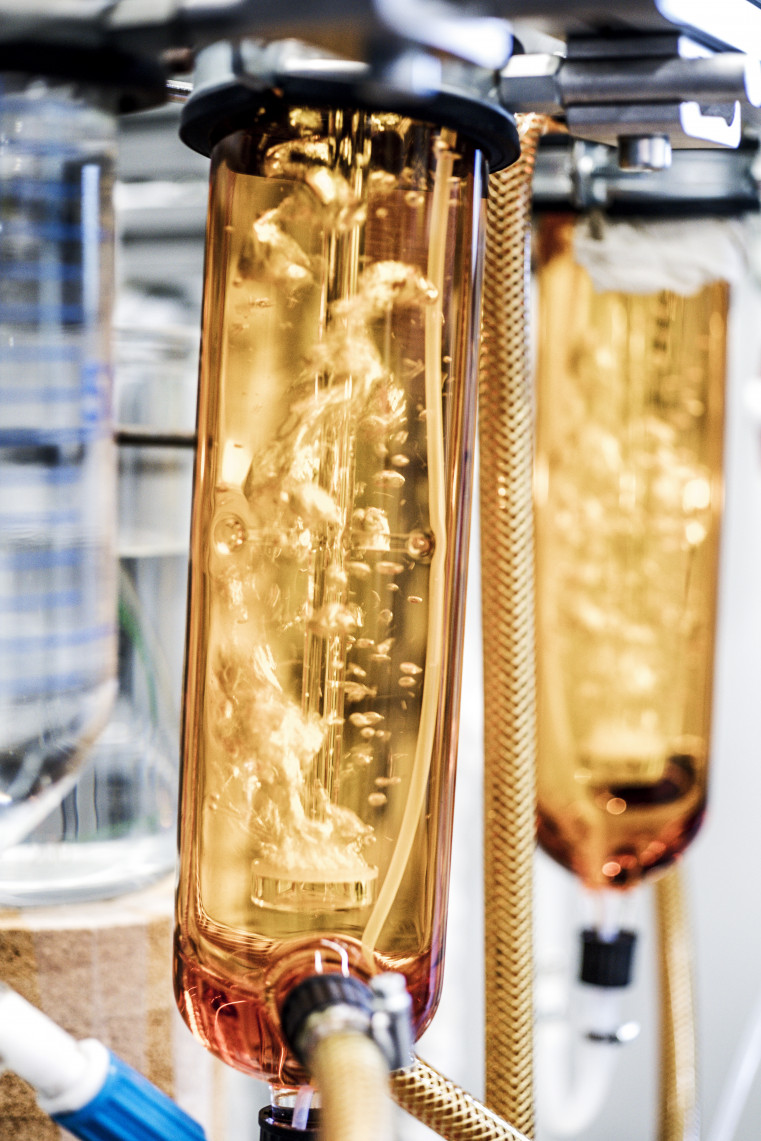 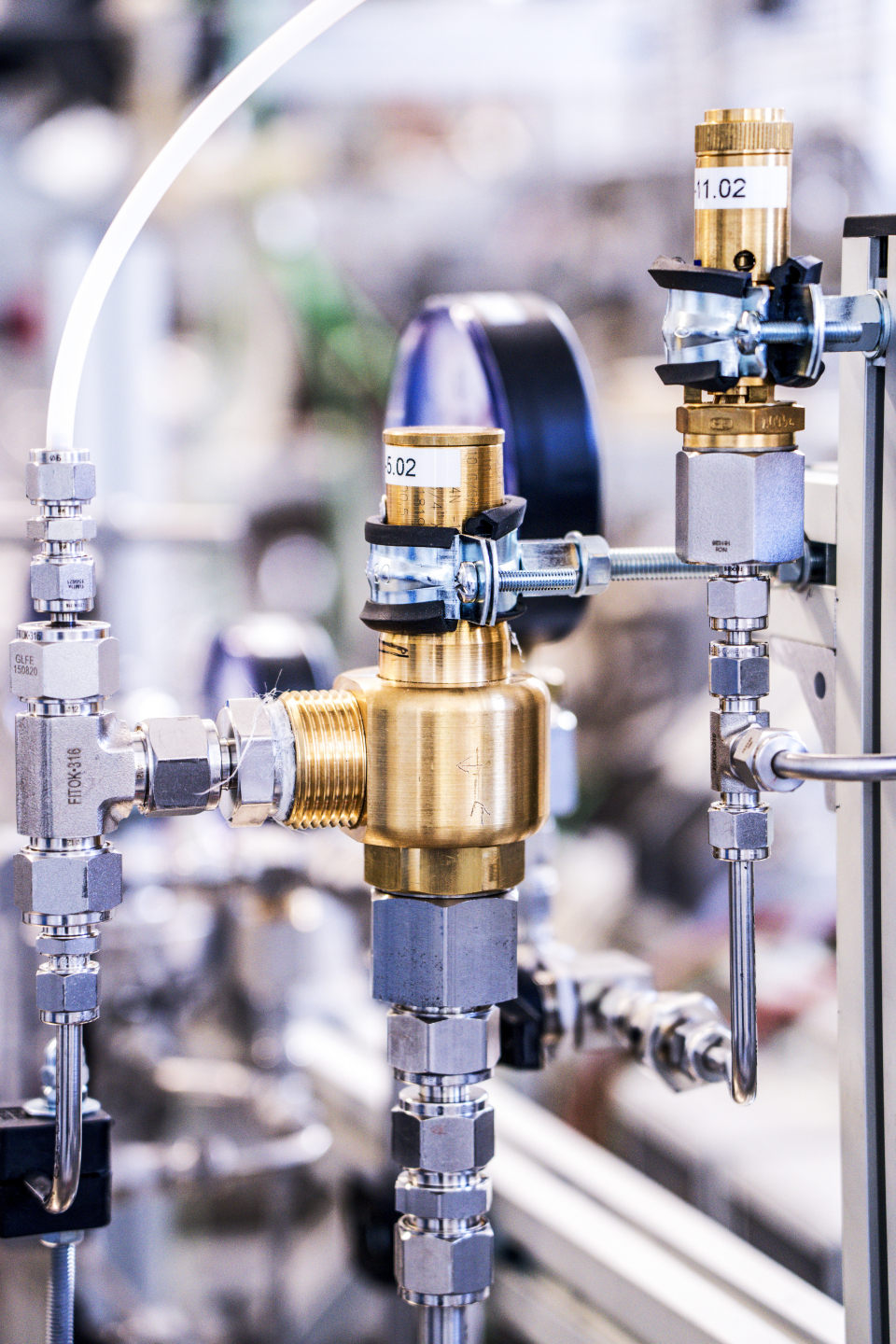 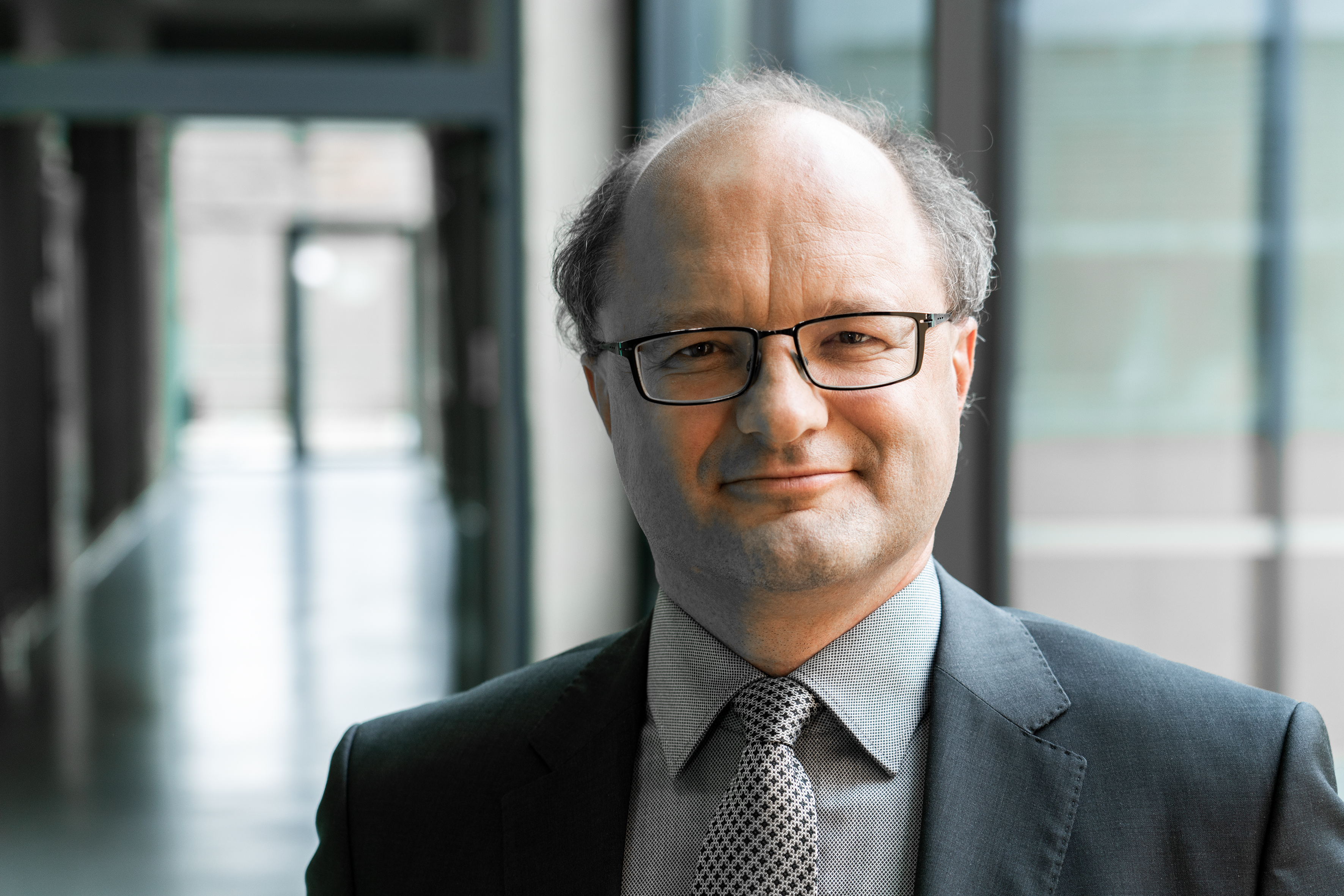 since 1998
Referee for numerous scientific journals (e. g. Nature, Angewandte Chemie, ChemSusChem etc.) and for numerous national and international funding agencies
since 2003
Contact professor of the Bavarian Elite Academy
since 2005
Spokesman of the DECHEMA-working group Advanced Fluids
since 2005
Member of the coordination board of the elite study course Advanced Materials and Processes of Friedrich-Alexander University Erlangen-Nuremberg
2006 - 2013
Initiator and coordinator of the DFG Priority Program Ionic Liquids
2008 - 2016
DFG Review Board Member
since 2007
Vice-coordinator of the Cluster of Excellence Engineering of Advanced Materials More than 200 publications in peer-reviewed journals and 70 patent applications. Prof. Arlt received the highest earnings for the purchase of a patent group in the history of TU Berlin. The focus of the patents was the recycling of the polymers in the so-called Yellow Bag of the German plastic packing recycling system.

9/2018
Emil-Kirschbaum medal for separation science
A special award is that eight of Prof. Arlt’s scholars became professors in Germany and worldwide. When considering a CO2 free energy system of the future, the option of using hydrogen as a source of energy is almost invariably cited. In terms of its weight, as the lightest known chemical element, hydrogen carries significantly more energy than petrol: one kilogramme of hydrogen contains almost as much energy as three kilogrammes of the fossil fuel. Hydrogen can be converted to electrical energy in a fuel cell, enabling it to be used as fuel in the mobility sector and other areas of the energy industry. If the hydrogen which is used is obtained by decomposing water using solar or wind power, an energy system is created that works without producing CO2 or any other harmful emissions.

Hydrogen vehicles are already becoming more readily available and are increasingly able to travel distances close to those reached by vehicles which run on either petrol or diesel. With refuelling times similar to those needed at a conventional petrol station, hydrogen refuelling is particularly suitable for long distances and larger vehicles, including buses, lorries, ships and trains. As the consequences of climate change become more apparent and heavy air pollution is proving a problem in many densely populated regions of the world, efforts have been made across the globe to make the transport sector more sustainable and free of hazardous substances. In this context, hydrogen has become a major focus of attention in public debate in recent years. Major corporations such as Toyota, Daimler, Hyundai, Audi, Engie, Alstom and Shell are making a position for themselves in this growth market.

However, despite all the progress which has been made so far, storing and handling hydrogen safely and cost-effectively still poses a challenge. The problem is that the volume-related energy density of hydrogen gas is very low under ambient conditions. For hydrogen to be stored and transported, technical measures have to be used to increase its density. At present, hydrogen is generally placed under very high pressure of up to 700 bar or liquefied at temperatures of under -250°C. Both processes are complex and expensive, especially since an entirely new infrastructure would have to be built across the board for this type of treatment. If hydrogen is to be used in future as an energy source in place of fossil fuels, a way must be found to integrate its storage and transport efficiently and safely into the existing infrastructure.

With this vision of a hydrogen-based sustainable energy system in mind, Prof. Dr. Peter Wasserscheid from FAU and Helmholtz Institute Erlangen-Nürnberg for Renewable Energy, part of Forschungszentrum Jülich, Prof. Dr. Wolfgang Arlt from FAU and Dr. Daniel Teichmann, managing director of Hydrogenious Technologies GmbH, have developed a way to fully exploit hydrogen avoiding the complicated handling of molecular hydrogen. Instead, hydrogen is chemically bound to a safe and easy-to-handle carrier liquid that can be safely used in the existing infrastructure of today's fuels. The hydrogen is released as necessary, leaving behind the carrier liquid which acts as a 'liquid refillable bottle' and can be refilled as required. The so-called LOHC (liquid organic hydrogen carrier) technology offers a simple and efficient method for storing and transporting hydrogen.

The advantages of this hydrogen storage technology are manifold: Since the carrier liquid can be handled like conventional fuel, there is no need to change the existing infrastructure already used on tank vessels, fuel tankers and petrol stations. The high storage density also enables the hydrogen to be transported efficiently over long distances and stored for extended periods of time without losses. As a result, it is possible for large hydrogen refuelling stations to be supplied with renewably generated hydrogen at a relatively low cost. The carrier liquid which is used is not classed as a hazardous substance, it is not toxic, slow to ignite, non-explosive and therefore greatly superior to both today's fuels and gaseous hydrogen in terms of safety. The nominated team has significantly advanced LOHC technology in recent years, in particular by introducing a new concept and developing the necessary catalysts, equipment and processes.

In order to make the technology available to the market, Dr. Daniel Teichmann, Prof. Peter Wasserscheid, Prof. Wolfgang Arlt and Prof. Eberhard Schlücker founded the company Hydrogenious Technologies GmbH in 2013. Based in Erlangen, the company develops, builds and markets industrial LOHC systems, which are already being used successfully in several countries. In Tennessee, USA, for example, Hydrogenious and its partner United Hydrogen Group have recently successfully commissioned several plants that provide industrial customers with hydrogen in a particularly straightforward and cost-effective manner. In addition, plants are currently under construction for use at hydrogen refuelling stations supplied with LOHC, destined for use after completion in Erlangen, Finland and China, and the company is also working on concepts for using LOHC directly in ships, trains, lorries and buses as an emission-free fuel.

Hydrogenious Technologies has already won numerous awards, including the German Business Innovation Award, the Energy Transition Award of the German Energy Agency and the Bavarian Founder Award. The company now has 65 employees and is involved in projects in Europe, the USA and China. Hydrogenious Technologies works closely with a number of reputable companies including Clariant, Sasol, MAN and Anglo Platinum. Due to the great interest across the globe in hydrogen in general and LOHC technology in particular, Hydrogenious Technologies expects a significant rise in turnover in the coming years, as well as an increase in international activities and further growth in the number of employees. In terms of research there are still close links with Friedrich-Alexander-Universität Erlangen-Nürnberg and the Helmholtz-Institute Erlangen-Nürnberg for Renewable Energy. Researchers there are specifically working on realising, in the medium term, a feasible option to use the carrier liquid laden with hydrogen to create electric energy directly via a so-called 'direct LOHC fuel cell'.

The technology therefore has potential reaching far beyond merely supplying hydrogen refuelling stations or the hydrogen logistics industry. In future, LOHC technology is hoped to form the basis for a sustainable energy system. Hydrogen, safely stored in LOHC, will help to balance the fluctuating yield of renewable energy, which is dependent on weather and the time of day, to meet actual demand. An even more important factor is the global transport of renewable energy. Whilst many sparsely populated regions in the world offer the best conditions for constructing high-yield wind or solar power plants, it is the densely populated and highly industrialised regions where the power is needed. The LOHC technology developed by the nominees makes it possible for hydrogen to be transported efficiently across the globe, as well as allowing hydrogen to be saved without any loss and in a manner compatible with existing infrastructure for a global energy system of the future without any CO2 emissions.

About FAU
Friedrich-Alexander-Universität Erlangen-Nürnberg (FAU), established in 1743, is one of the largest universities in Germany, with roughly 40,000 students, 580 professors and more than 14,000 members of staff. In the Reuters ranking of the 100 most innovative universities in Europe, FAU is currently in 5th place, ahead of well-known universities such as Oxford or Leiden. In addition to the Cluster of Excellence 'Engineering of Advanced Materials' (EAM) and the Graduate School of Advanced Optical Technologies (SAOT), which was founded as part of the Excellence Initiative, FAU currently has more than 40 coordinated programmes funded by the German Research Foundation (DFG).

FAU offers around 260 degree programmes, including Bavarian Elite Master's degree programmes and around 50 programmes with a distinct international focus. No other German university offers such a broad and interdisciplinary range of subjects on all qualification levels.

About Forschungszentrum Jülich
With approximately 5,900 employees, Forschungszentrum Jülich makes a valuable contribution to tackling major challenges faced by society in the areas of information, energy and bioeconomics. It focuses on the future of information technology and processing, complex processes in the human brain, the reform of the energy system and a sustainable bioeconomy. The research centre continues to develop simulation and data science as a key method of research, using large, often unique, scientific infrastructures. Its work spans a range of topics and disciplines, making use of the synergies between the various research areas.

The right to nominate outstanding achievements for the Deutscher Zukunftspreis is incumbent on leading German institutions in science and industry as well as foundations.
The project "Liquid hydrogen storage - paving the way for a future hydrogen society" was submitted by “Helmholtz-Gemeinschaft Deutscher Forschungszentren e. V.”.