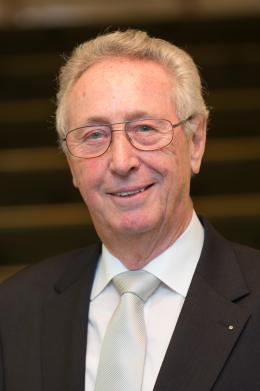 Chairman of the Board of the Hector Stiftung II

“The success stories written by the prizewinners of the Deutscher Zukunftspreis are always fascinating. They were usually preceded by the brilliant idea of a scientist who then dared to depart from the well-trodden path of his discipline. And from there it was often a long and frequently difficult road to the market readiness of an idea or invention.

The prizewinners travelled this road successfully - with creativity, tenacity and diligence as well as extraordinary powers of innovation and ultimately with a sense of what our society needs to master the challenges of the future.

This deserves the highest recognition and respect which is why the Hector Stiftung gladly joins the ranks of the supporters of the Deutscher Zukunftspreis. The Federal President's Award for Technology and Innovation also ideally continues the route taken by the Hector Stiftung with its many years of sponsoring of gifted school children and university students as well as its support for cutting-edge research at top German universities.

"Turn ideas into successes. For our people. For our country." The Hector Stiftung also avidly supports this aim of the Deutscher Zukunftspreis.”