Non-returnable bottles made of PET for beverages have long been notorious for polluting the environment and being harmful for the climate. Yet current studies give evidence that they are no more harmful for the environment and climate than glass bottles. However, the condition for this is that the PET material is reclaimed, recycled and used to produce new bottles. Before this can happen, impurities and contaminants must be removed from the PET. How is it done? Prof.-Dr. Gunther Krieg, Dipl.-Ing. Dirk Fey and Dipl.-Ing. Jürgen Bohleber have developed a system that separates polyethylene terephthalate (PET) reliably from other materials during recycling so that even minute and virtually undetectable amounts of impurities and contaminants can be sorted out and the recycled plastic used without reservation to produce new bottles in a process that has come to be known as closed-loop or PET bottle-to-bottle recycling. Gunther Krieg heads the Transferzentrum Optoelektronik und Sensorik of the Steinbeis Foundation in Karlsruhe and founded UNISENSOR Sensorsysteme GmbH in 1990. Dirk Fey is chief technical officer at the firm, Jürgen Bohleber is project manager responsible for designing sensor machines for the recycling industry. 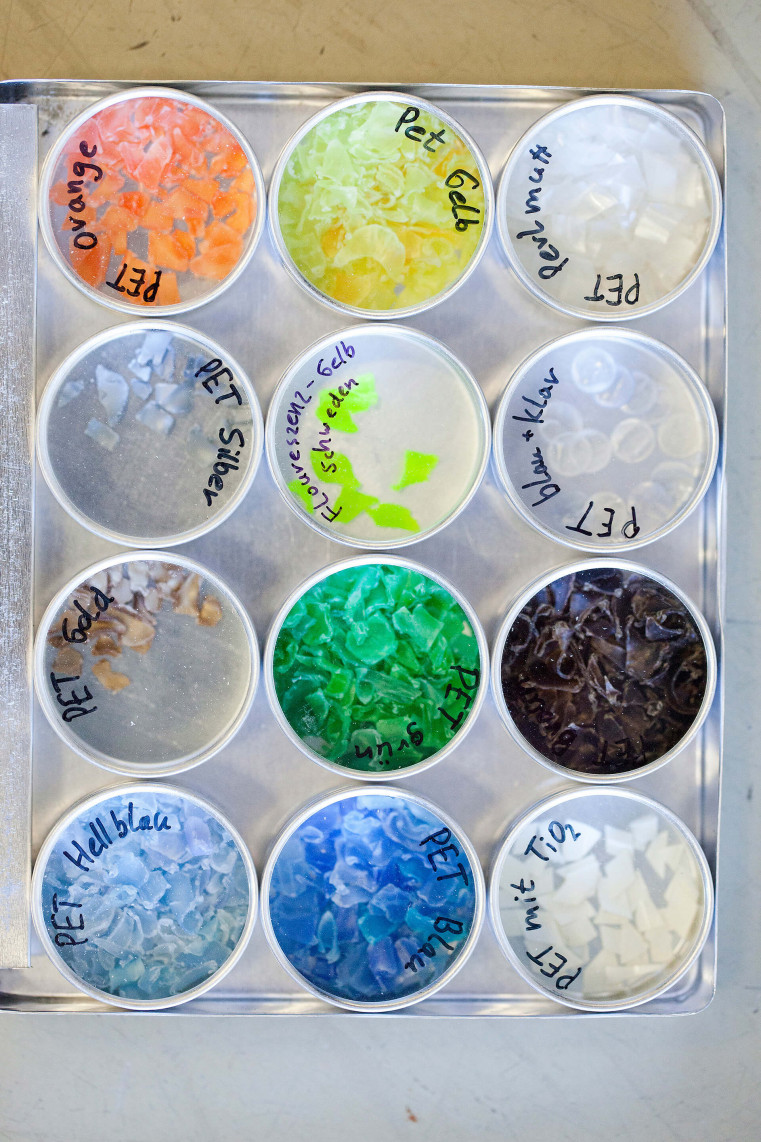 “Powersort 200”, the system they have developed, is based on ultra-high-speed laser spectroscopy. In the process used, powerful lasers expose granulate or plastics crushed into flakes to ultraviolet, visible and infrared light.

The light excites molecules in the plastic which disperse the light. The wavelengths in the scattered light are a characteristic, physical fingerprint of the material. Sensors that capture the light and analyze it instantaneously are able to differentiate PET reliably from other materials such as PVC or nylon, color residues and impurities such as paper or glue residues. The process even works on minute particles. Supersonic air jets remove the unwanted substances.

More and more beverages around the world are being bottled in non-recyclable PET bottles. Every year manufacturers process around seven million tons of PET. In Germany, almost 70 percent of all light-weight non-recyclable bottles are manufactured for mineral water – and the trend is rising. To reduce demand for petroleum – the starting material in PET bottles – empty bottles are collection and recycled. In conventional methods, however, many impurities and contaminants were unable to be identified and removed. Consequently, in the past, only part of the recycled PET found its way back into food-grade bottles. The rest was used, for example, to manufacture clothing or tarpaulins. The new process, however, achieves such a high grade of purity that the recycled material can be 100% reused to produce in juice, beer, soft drink, or mineral water bottles without any risk to consumers.

Gunther Krieg founded UNISENSOR Sensorsysteme as a spin-off of the Research Center Karlsruhe (now: Karlsruhe Institute of Technology, KIT) and the University of Applied Sciences Karlsruhe. Together with Dirk Fey and Jürgen Bohleber he has been an instrumental force in the development and marketing of the innovative plastic recycling technology. It closes the recycling loop of plastics in foods technology and conserves the use of dwindling resources such as petroleum and energy and significantly reduces CO2 emissions. The economic and ecological potential is enormous. The system is already being used successfully at several recycling centers in Europe and the U.S. – including, for example, the largest European PET recycling company in the Netherlands and in a Coca Cola Company facility in the USA. And: The process will soon also be used to separate and recycle plastics from waste electrical and electronic equipment, such as PC’s or TV’s as well as automobiles. Waste will thus become an exploitable resource. 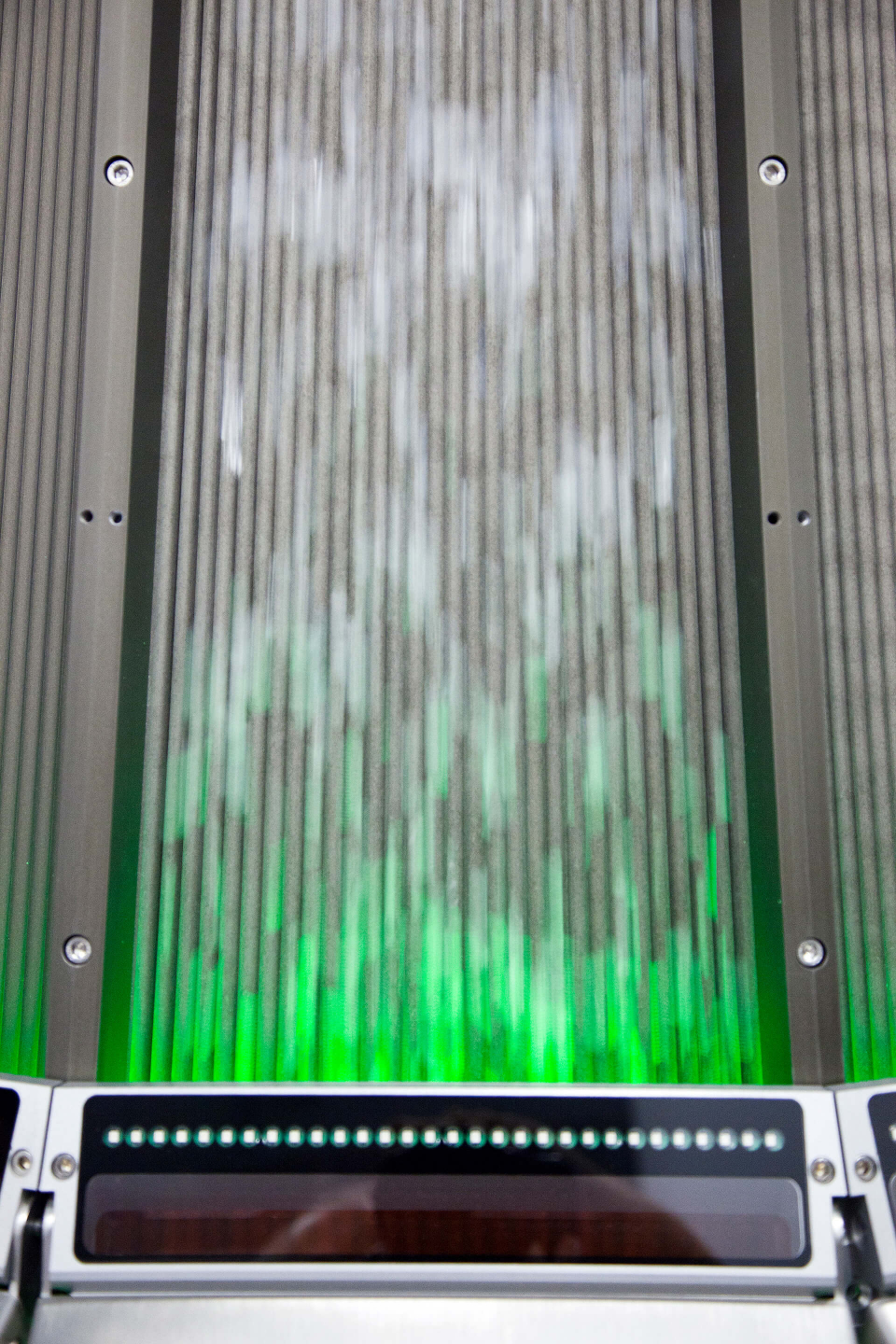 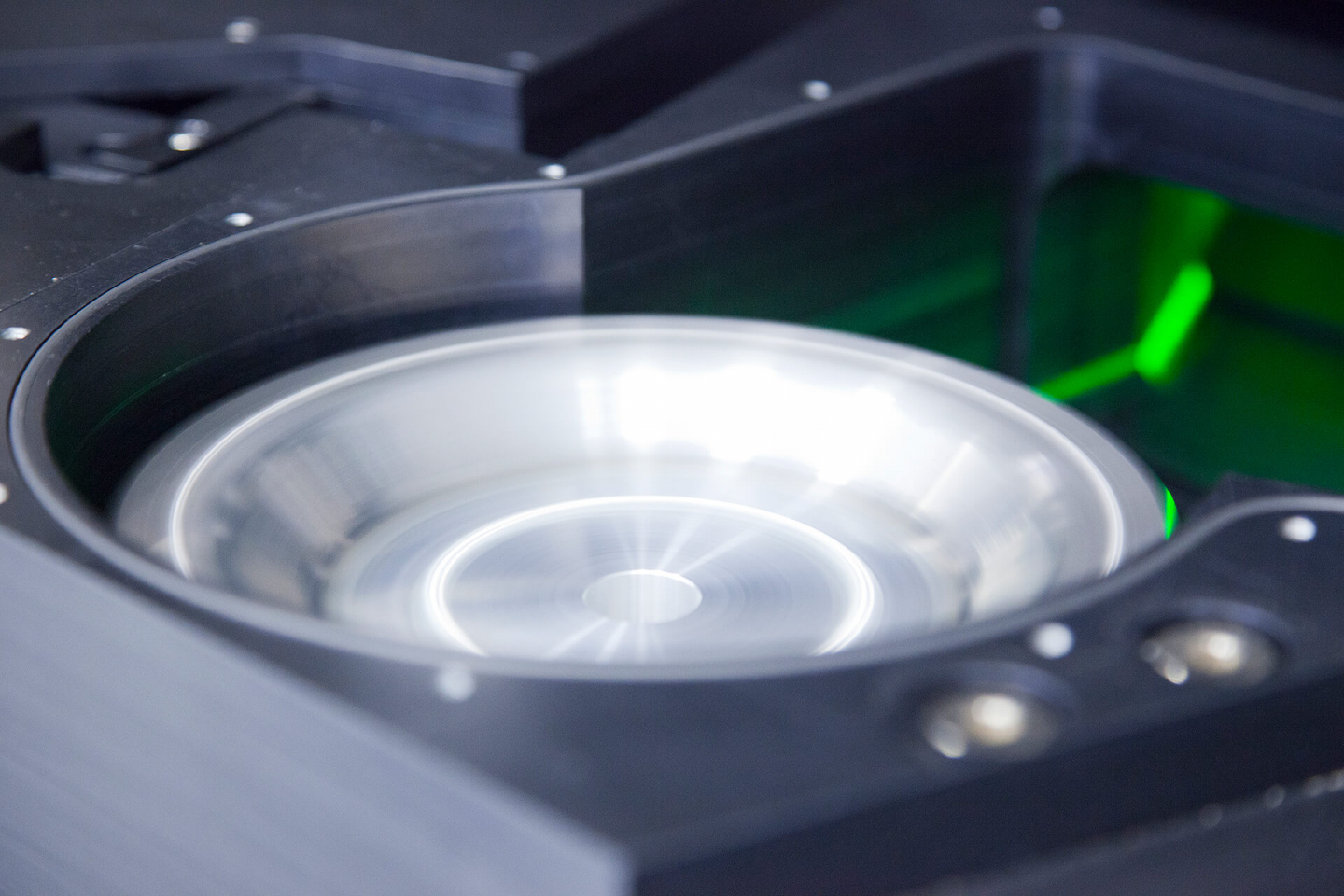 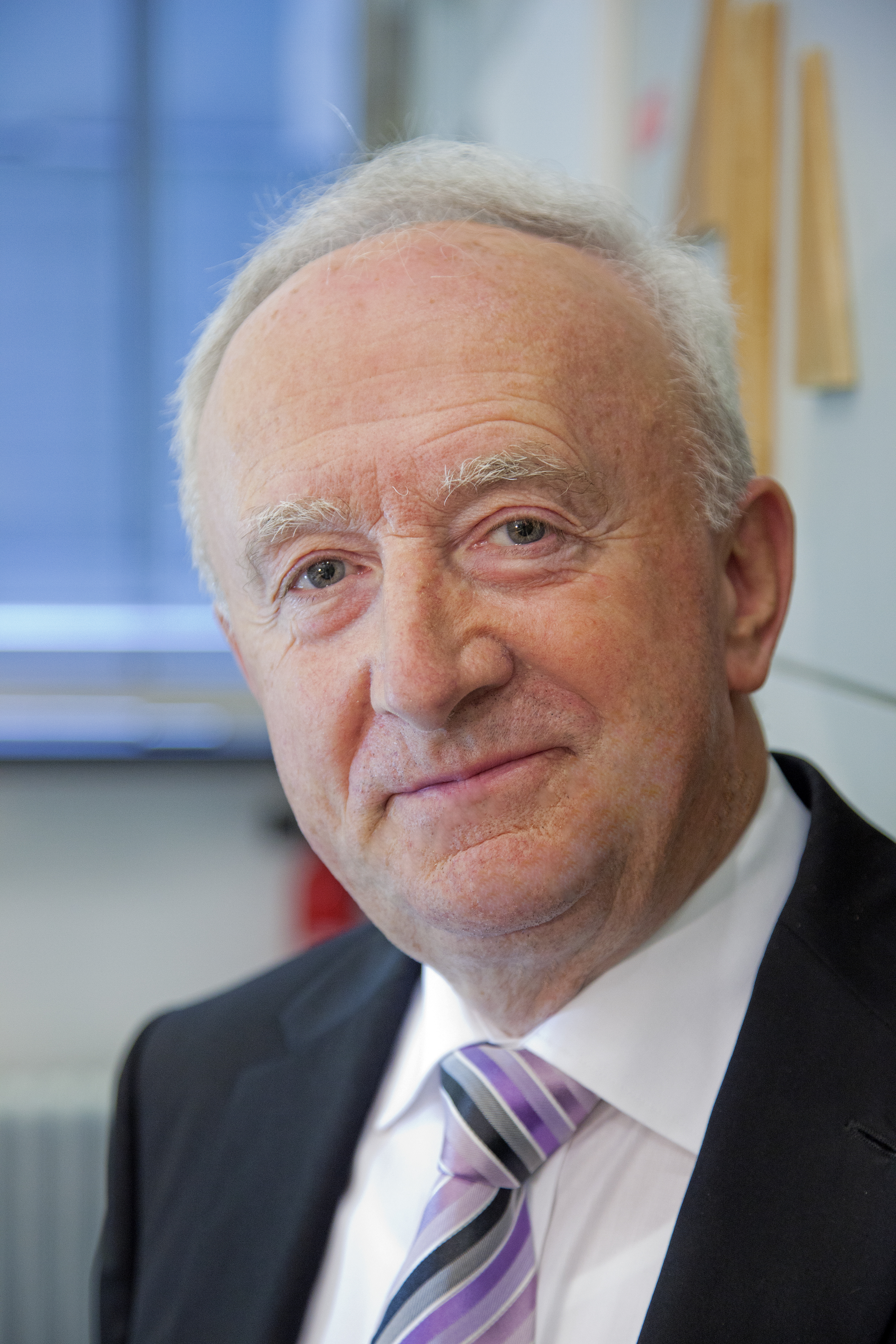 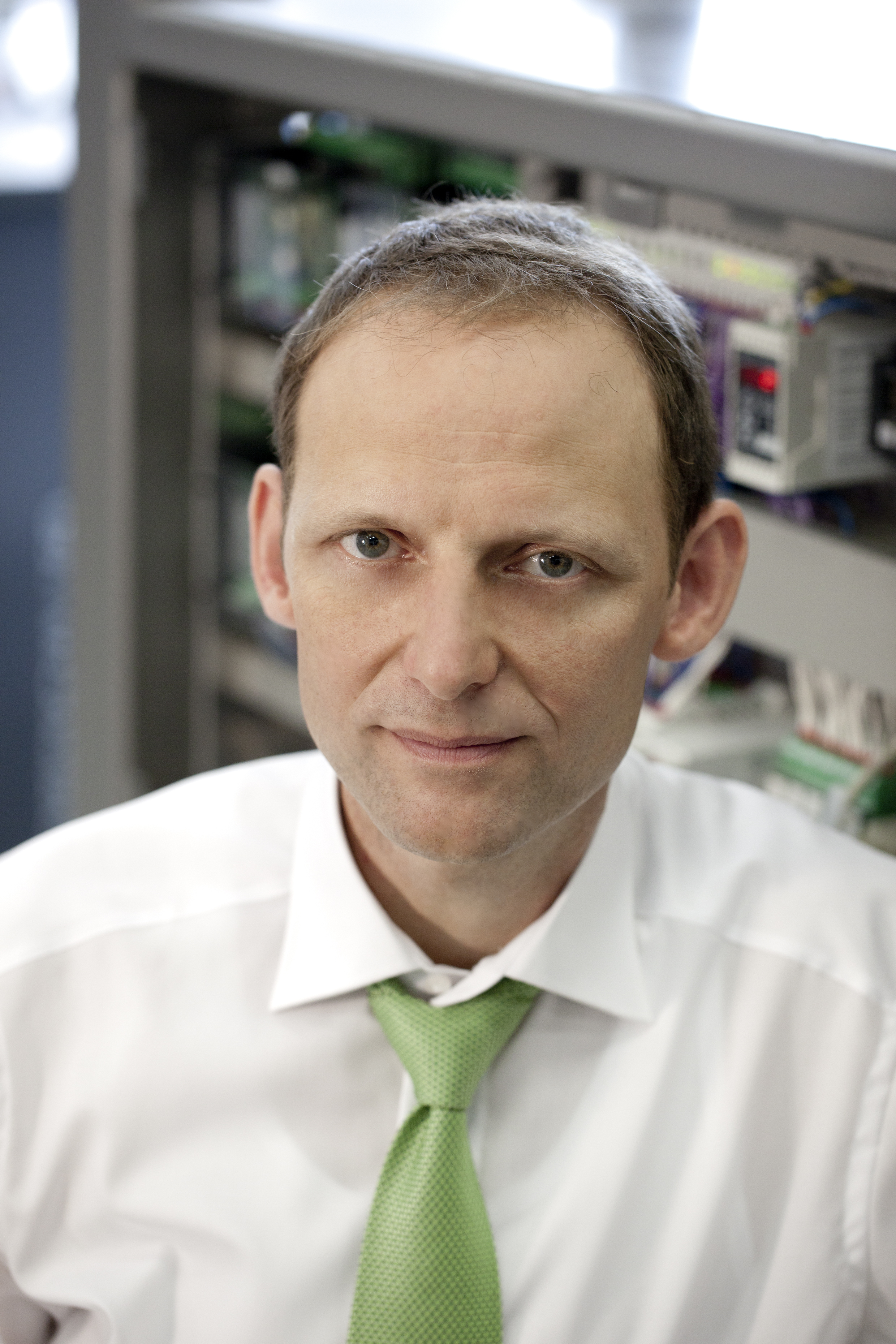 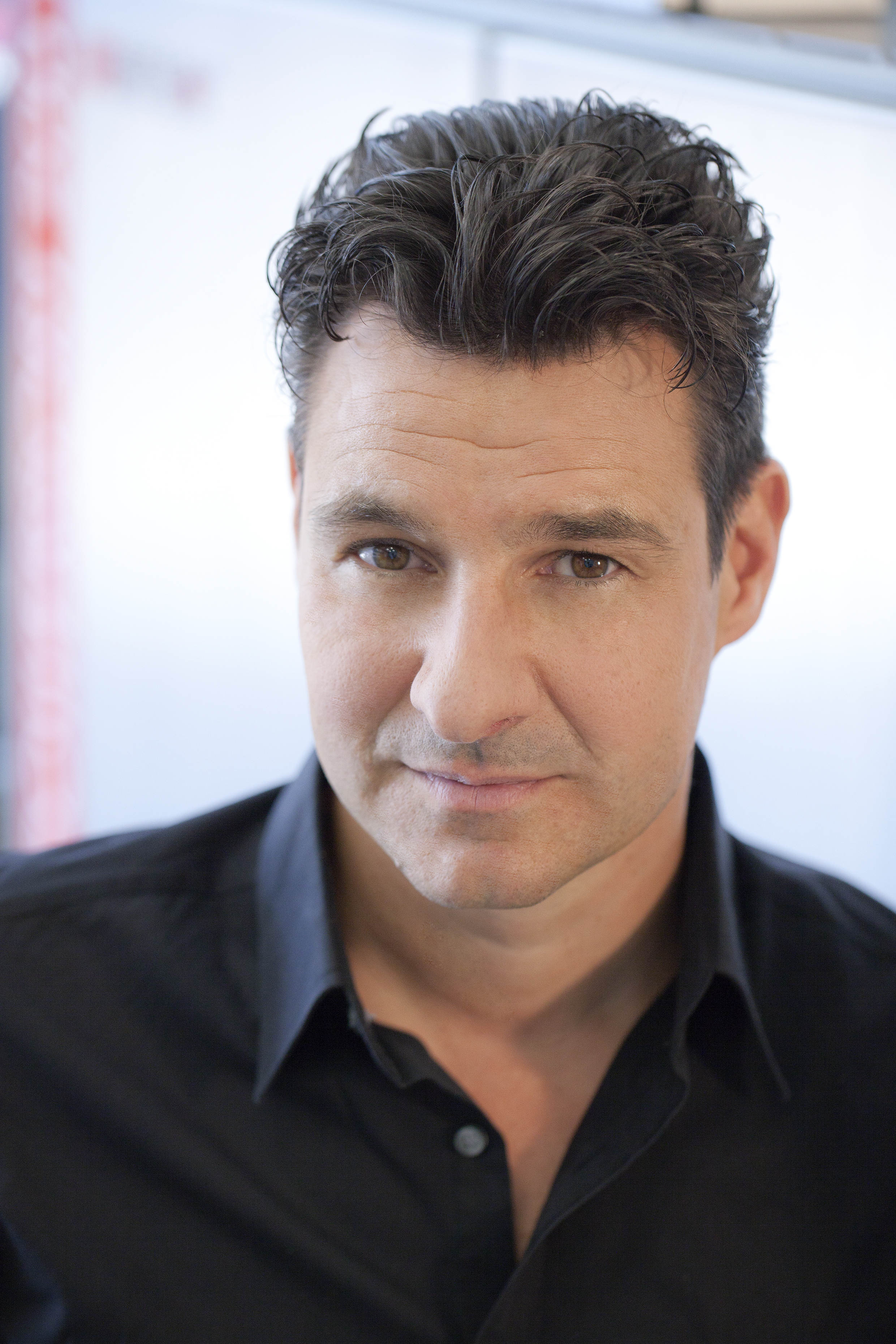 The supply of oil is limited. Consequently, the recycling of plastics is becoming increasingly important. How can these valuable recyclable materials be detected in mixed material streams and reused? It is this extremely challenging task which the team surrounding Prof. Dr. Gunther Krieg, Dirk Fey, and Jürgen Bohleber has been addressing for over a decade. The result of this large-scale research and development project bears the name Powersort 200. In developing this product, Unisensor Sensorsysteme GmbH has made a unique technology available to industry that presents entirely new opportunities in the area of material sorting and in the recycling of starting materials.

Plastic is everywhere today, as PET bottles, as housings for electronic equipment and other devices, in vehicle interiors, as food packaging and in many other applications. It is made of valuable raw materials, such as oil or natural gas. 1.9 kilograms of petroleum, for example, and vast amounts of energy are needed to produce one kilogram of polyethylene terephthalate (PET). Yet the supply is limited, and what could be more obvious than to recycle plastics on a large scale? This ensures not only an efficient use of resources, but prevents enormous mountains of waste from accumulating. And ultimately higher profits can also be made with high-quality recycled plastic.

One source of potential difficulty, however, is the proper separation of the individual materials because mixed plastic recycling streams contain not only recyclables, but frequently also other types of plastics, plastics with chlorine or heavy metal compounds as well as contaminants and additives. Using visual, camera-based or other conventional methods, many of these unwanted substances are not able to be identified at all during the recycling process or only to a limited extent. They are often unable to be differentiated by color or any other standard parameters. Even minute particle sizes pose a problem for conventional sorting systems. If the level of impurities in the recycled material is too high, the material is considered poor grade and is limited in the extent to which it can be reused.

Ultra-High-Speed Laser Spectroscopy with Powersort 200
Powersort 200 starts where visual or other established systems and detection processes reach their limits. The system uses a highly efficient and accurate detection process based on ultra-high-speed laser spectroscopy: it identifies the material in a plastic flake or granulate stream based on its specific optoelectronic spectrum and sorts it in only one process step, separating various impurities and contaminants from the stream.

The system was originally developed at the instigation of a major beverage producer with the goal of returning 100 percent of the PET non-returnable bottles they put into circulation back into a closed recycling loop and of stopping the accumulation of mountains of waste. Powersort 200 makes PET recycling possible today in food-grade quality within the framework of bottle-to-bottle recycling, for example.

The powerful, efficient system also reveals its strengths in other areas of plastics recycling. It can also reliably separate dark or black mixed plastics found in the interiors of all vehicles, for example.

The Physical “Fingerprint”
Powersort 200 identifies the different plastics on the basis of their characteristic optical spectrum, their physical “fingerprint”. In this process, high-energy laser light excites individual components to fluoresce or to Raman scattering. The light emitted by the materials is recorded for subsequent spectroscope analysis wherein the measured range extends from ultraviolet to visible light to the near infrared. This wide-band and highly differentiated spectrum makes an accurate material analysis possible and thus a differentiation between recyclable material and impurities. In principle, all material streams can be detected and separated in this way whose molecules can be excited to fluoresce or are Raman-active.

Due to the system’s multispectral, fast optical design as well as an incredibly fast signal processing speed with powerful signal processors, up to one million spectra are generated and evaluated per second. With the help of this high resolution even minute particles with a surface area of only one square millimeter can be analyzed and sorted.

Once a particle in the input stream is identified as an impurity, a number of supersonic air jets remove it from the material stream. The distance between measuring field and air blast mechanism is extremely short and, together with the option of setting detection thresholds and air blast unit for specific materials, results in a very low incorrect reject rate. Depending on the type of impurity or contaminant, Powersort 200 can remove over 98 percent with a minimal loss of recycled material.

PET in Food-grade Quality
Plastic recyclables contaminated by impurities can cause considerable problems and compromise quality during downstream processing. In the area of PET recycling, for example, these are PVC, nylon, silicone, PET with TiO2, PLA, PC, glue / salt or paper as well as flakes with barrier materials (such as scavenger, blends, or multilayers) – typical impurities which are not easily differentiated visually from PET material. These contaminants result in lower transparency, discoloration, and ultimately to poor quality due to cracks or inclusions during subsequent processing, such as during the production of new PET bottles for beverages, for example.

Powersort 200 detects impurities and contaminants, separates them from the material stream and thus ensures the high quality of the recyclate, ensuring even its suitability for direct food contact applications. This is where conventional detection systems are unsuccessful because PET contaminated with transparent, PVC, nylon or other materials cannot or only with great effort be differentiated visually from pure PET in crushed form. It is not until the flakes or granulates undergo further processing and are thus subjected to high temperatures that these impurities become visible in the final product as discolorations. It is also difficult, for example, to detect brown wood and glue residues in brown PET. Powersort 200, however, is able to detect and sort out the different materials reliably on the basis of their specific spectrum, the physical fingerprint. This method also works for the fractionation of black mixed plastics.

Following a successful market launch in 2008, the Powersort system is now being used worldwide by leading recyclers. One of these companies is NURRC in Spartanburg, USA that produces up to 50,000 tons of recycled food-grade PET annually using Powersort 200. According to the company, global carbon footprint is reduced by a million tons by the plant in Spartanburg alone. To achieve the same results, 215,000 cars would have to be taken off the streets.

About Unisensor:
Unisensor Sensorsysteme GmbH is a family-run, innovative high-tech company in the field of process technology. Unisensor’s product portfolio includes internationally patented systems for the beverage, gas, printing and recycling industry as well as for the field of energy technology.

Twenty years ago, Prof. Dr. Gunther Krieg paved the way for extraordinary innovations with the founding of the company and his many years of experience in the field of optoelectronics and sensor technology. Since then a team of highly qualified staff working closely with industry and technical universities have been developing groundbreaking technical solutions and products which are used around the world and have set new standards in process technology.

The right to nominate outstanding achievements for the Deutscher Zukunftspreis is incumbent upon leading German institutions in Science and Industry as well as foundations.

The project “Laser Light finds Recyclable Materials – Resources for Our Future” was nominated by the AiF – The German Federation of Industrial Research Institutions.